A variety of events are held throughout the year at Toshogu Shrine. Many Japanese look forward to going to shrine festivals, and visitors can enjoy a part of Japanese culture when visiting the shrine on a festival day.

The antique market in March has been canceled to prevent the spread of infectious diseases.

The antique market at Toshogu Shrine is held on the fourth Sunday of every month. Antique items such as old works of art or tools are sold. They also include items such as tableware, kimono, desks and old coins. 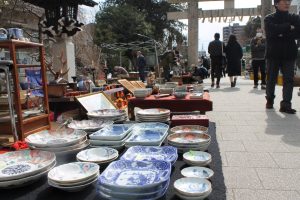 Antique markets have been popular among Japanese people since ancient times. The market held at Sendai Toshogu Shrine has a long history.

The antique market displays a variety of items ranging from a dish priced at several hundred yen to a cupboard priced as high as several tens of thousands of yen. Shops from all over Tohoku prefectures participate in this market. This is another good opportunity for visitors to experience and understand Japanese culture. 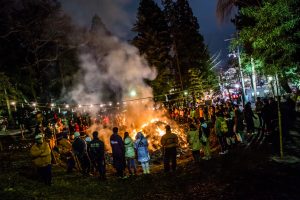 Japanese people believe that the Kami visits each home at midnight when the New Year begins. They put special decorations at the entrance and other important areas in their homes so that the Kami will be able to find them easily. They also place mochi (rice cake) as offerings to Kami. Later, this mochi is cooked as Ozoni (rice cakes in a broth) and eaten by each family.

On January 14 of each year, the Dontosai Festival is held. People bring New Year’s decorations from their houses to the shrine where they are burned in a large bonfire. People also bring old omamori and other items to burn them. This event is held to thank the Kami for their protection who returns back through the sacred fire called goshinka.

The bonfire starts at 3:00 p.m. and continues till about 10:00 p.m. According to one legend, people who warm themselves by this bonfire will remain healthy. 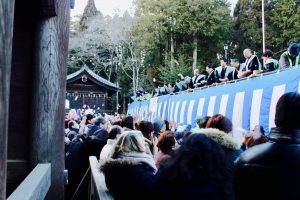 February 3rd is called setsubun, and its ceremony is held on this date because the following day, February 4th, traditionally signifies the beginning of spring. The setsubun ceremony is an event to drive away evil spirits that come on the last day of winter and purify the spirit and body of humans. People throw roasted soy beans from inside the house as well as eat them. A play on the word for “bean” in the Japanese language can be expressed as “expelling evil.” At the setsubun ceremony at Toshogu Shrine, beans and mochi rice cakes are scattered from a stage and visitors catch them to receive blessings from the Kami. The ceremony takes about 10 minutes starting at 3:30 p.m.

Spring Festival (the third Saturday and Sunday in April)

This spring festival has been canceled to prevent the spread of infectious diseases. 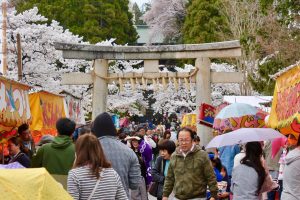 Toshogu Shrine Reisai is a major annual ritual held on April 17 each year. This ritual is attended only by community leaders in neighboring areas, and is not open to the public. However, along with the Reisai, a spring festival is held. At this festival, traditional stalls are lined up to sell food items such as takoyaki (seafood pancake poppers), kakigori (shaved ice topped with flavored syrup). Visitors can enjoy the performance of kagura (traditional music and dancing) which is dedicated to Kami.